What’s behind the sky?

Australian director of stage and screen

Your films seem to be a different beast to your theatrical work. Is there a different directorial impulse at play in your films?
That’s tricky to answer. Several of my movies have fed off stage productions. Rocky Horror obviously, and The Night The Prowler grew out of directing the stage plays of Patrick White. I approached them cinematically, but an element of theatricality is apparent. However, I’d equally suggest that many of my stage productions have a strong cinematic influence. Working across mediums you get some cross-fertilisation. I’m also influenced by silent movies and they often had a theatrical side – especially German silent movies, which I admire – so there’s that too.

Tell us about Arcade, your first short.
It was a 5 minute no-budget underground movie that I made in 1970. and barely remember. It was shot over a weekend with the help of artist Gary Shead. From memory, it’s a cautionary tale about drugs, involving a young guy in a shopping complex. An interesting aspect is its alienated protagonist. That idea led to my first indie feature, which is popular with film students: Shirley Thompson versus the Aliens. It was a feature written by Helmut Bakaitis, shot in three weeks, edited in one, made with friends for about $17,000. A true 1970s underground movie. It formally mixes sci-fi, rock n roll, B movie and arthouse stylistics. This would find a more sophisticated outlet in The Rocky Horror Picture Show. It also features an alienated protagonist, the kind of character further explored in my later film, The Night The Prowler. This rough early indie feature contained the seed of these two later more substantial movies.

You worked briefly on the 1970 production of Ned Kelly (dir: Tony Richardson) before completion. Were there artistic differences there? What did you learn from Tony Richardson?
Tony Richardson had seen and enjoyed my production of Hair and he asked me to assist him on Ned Kelly. I was grateful for the experience and helped with the preparations. There were no film schools then, so the only way to learn about movies was on the job. This was my first and only real experience of moviemaking before directing my own films. Mick Jagger had just come off Godard’s Sympathy for the Devil, so I assumed Tony was mixing Mick’s rebel persona with the outlaw tale. Once I realised it was a traditional  telling of a colonial story, I wondered why Tony had chosen Mick rather than a more conventional movie star. It seemed a waste of Jagger’s strengths and allure. I finally left, but not before observing a lot and learning about filmmaking from Tony, who became a good friend. Tony was a generous mentor and through him, later, in London, I met the Royal Court gang, which led to a string of productions. For the fiftieth anniversary of the Royal Court they surveyed the theatre’s all-time favourite productions and my original Rocky Horror and Tony’s Look Back In Anger came out on top, which somehow reflected the connection.

Rocky Horror is the film that really took off. But there does appear to be a thread through all of your films—something to do with wicked satire, the surreal and a reverence for genre film itself. Are there other unexpected commonalities we could find?
My main interest in genre is in re-inventing it, mixing popular and arthouse conventions. And satire, as Variety once said, is what closed last week – a truism I was reminded of with Shock Treatment, which came and went very quickly. In being a savage satire on cults, it bit the hand that fed it. However, 40 years after the event, there is a resurgent interest in this underrated movie. It was prophetic in depicting a world captive to reality television, yet made before reality TV was invented. I felt it was a better movie than Rocky Horror, which has the feel of a home movie, but Rocky has hidden depths and a lot of heart. Shock Treatment has a great score, looks terrific and plenty of bite. All my movies are in some way provocative but that one had a lot of sting in its tail.

How important is the word ‘subversive’?
My own movie education was sitting huddled at late-night screenings and nearly all the movies I saw and liked were in some way subversive. So maybe it’s no surprise I made the ultimate late-night movie. And yes, in some ways it’s subversive – in form and content. They all are. I tend to ignore technique, subvert conventions, and aim to make the ground move a little under the viewer’s feet. If you grow up in a conservative world, and post-war suburban Australia was very conservative, and you want to see that culture change, then your work will inevitably reflect that desire. You can see that same impulse at work in many cult films, be they masterpieces by Murnau, Pabst, Bunuel, or trashy B-pictures by Ed Wood or Russ Meyer – it’s always there. Other film-makers may study cinema grammar but my reading, apart from the inspiring Truffaut / Hitchcock interviews, was Amos Vogel’s Film as a Subversive Art.

What is a cult movie?
Cult movies sit outside the mainstream. They have a fanbase and sometimes specialist or late-night screenings. They often have a transgressive element that captures the imaginations of buffs. They can be fun, or serious, anything from the excesses of B pictures to art movies like Bunuel’s Un Chien Andalou, a short surreal film and early cult classic. For me, a true cult classic has layers of meaning, so the more you see it, the more you get out of it. You can’t really set out to make a cult movie, but some movies slip through the net and they get taken up by fans and anointed as such.

Your early interest in art films didn’t end with Buñuel and Godard. Who are some (perhaps little-known) filmmakers today whose work you follow?
If we’re talking cult, the Thai film-maker Apichatpong Weerasethakul seems to be doing things no-one else is with cinema. Uncle Boonmee Who Can Recall His Past Lives, is a personal favourite. Also, an early Tom Tykwer movie – Run Lola Run – is an inventive masterpiece. Mainstream, it’s hard to see beyond franchises, but I liked Boyhood by Richard Linklater and, of course, The Grand Hotel Budapest by Wes Anderson. And you still can’t do better than revisit anything by past masters like Billy Wilder, Alfred Hitchcock or Stanley Kubrick.

Technology has made filmmaking more accessible than it was for most of the 20th Century. Do you think your films could be made today?
My recent excursion into digital with Andy X was enjoyable. In some ways it was like revisiting the early ‘underground’ work, as we had neither money nor time and it encouraged a kind of imaginative music video approach to the subject, which I enjoyed. Before that I’d made a feature length ABC–TV documentary on Patrick White (The Burning Piano) that also involved a lot of fluency, which was fulfilling. I’ve never really understood why you need an army to make a film – and now you don’t. I think that’s a plus.

The double-feature has been supplanted by ‘Netflix-and-chill’. As you’ve said elsewhere, people will always want to gather and look at shadows on a wall and hear a story. What do you think is in the future for movies?
Cinema was a twentieth century art form. Between WW1 and WW2, and post-WW2, countless masterpieces were created – cinema with the intense surreal poetry of a waking dream – and we can still enjoy them on whatever platform. But a new century will demand a new art form, one that’s still being born. The current enthusiasms – for online, for long form TV – might just be steps on the way to something more original that is yet to take shape. The beat will go on but maybe to a different drum. 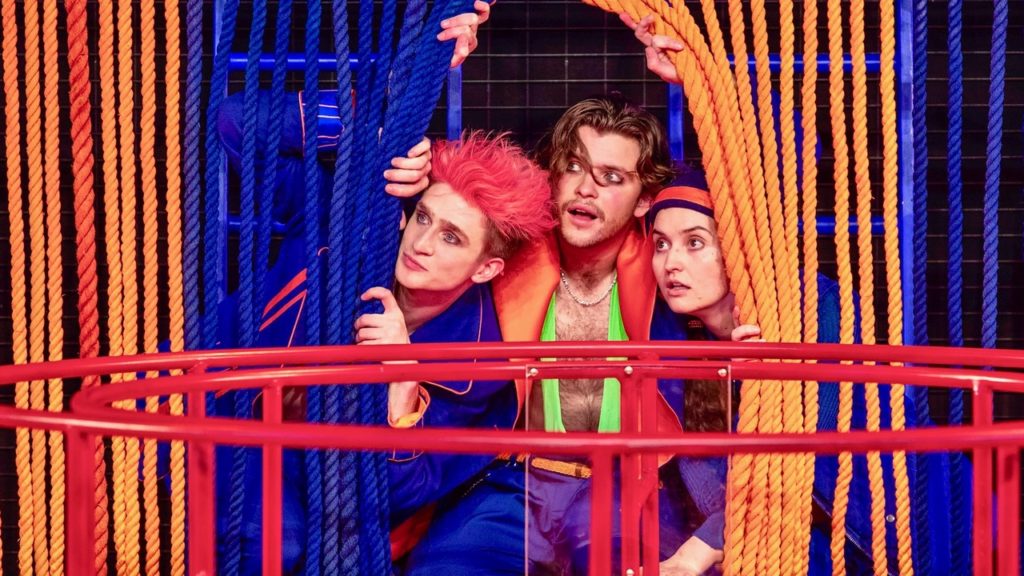 As part of NIDA’s 60th anniversary celebrations, Jim returned to his alma mater and directed Shakespeare’s carnival comedy, Twelfth Night, with second year actors and final year designers. The production sold-out and was a highlight of the celebrations. 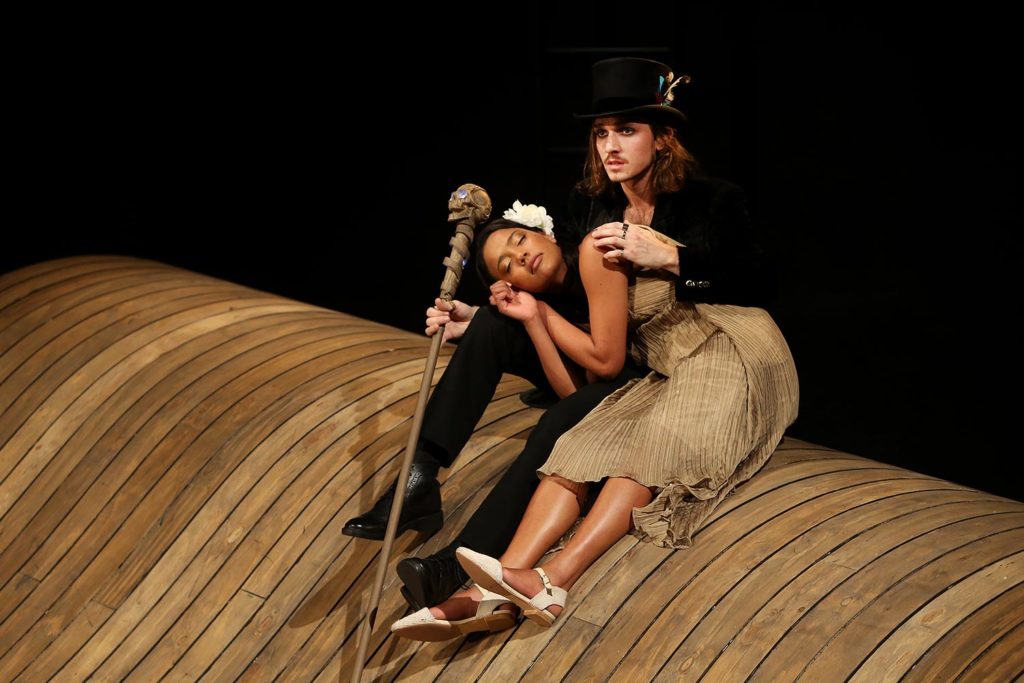 Jim received the 2017 Centenary JC Williamson Award for his outstanding contribution to the Australian performing arts.

He was delighted to receive the award along with professional colleagues Robyn Archer AO, Reg Livermore AO and Robyn Nevin AM and Archie Roach AM at a special ceremony at the Utzon Room of the Sydney Opera House.